“Let’s walk up to the house and sit on the back porch,” says Donald F. Lynch, Jr. as I approached the office building on his property to conduct the interview for this article. “I think we’ll be more comfortable there.”

Immediately greeted by Don’s wife and company Vice President Mary Sue Lynch, I was welcomed into the home with a hug and offered a cold drink as we made our way through the kitchen to the covered back porch. Watching the sun set over the rolling Harford County farmland that surrounds his home and office and settling in to a quick and warm exchange with Lynch Jr., his son Donald Lynch III, and Mary Sue, it was plain to see how clients would be instantly at ease with letting the team at Lynch Construction into their lives and homes.

The current iteration of Lynch Construction with Lynch Jr. at the helm as president has been operating as a home improvement and construction business since 1979. Family and friends kept him busy with projects right out of the gate, but newly married and starting his own family, Lynch Jr. seized an opportunity to develop a neighborhood of townhomes in an up and coming area called White Marsh.

“Two bankers that my Dad knew called me after another builder referred me to take over this project. They had acquired 18 townhouses from a bank and wanted me to come and manage the final construction and developing. They offered me a fixed salary and a benefits package, and I’m thinking I found my ‘golden goose.’ As a new husband and planning to have children, I couldn’t refuse,” remembers Lynch Jr.

Lynch Jr. managed a crew of eight to nine workers and completed the project to stellar reviews by the bankers, but a disagreement on how to appropriately handle some situations led to Lynch Jr. refusing an offer to continue with additional ventures. “I wasn’t willing to do some things they wanted, so we parted ways,” Lynch Jr. admits.

With a new found appreciation for doing things the way his father had taught him, Lynch Jr. set out on his own again, but this time got his mother’s blessing to incorporate the name Lynch Construction, which she had retained after Lynch Sr.’s premature death in 1973.

Donald F. Lynch, Sr. started Lynch Construction in 1958. He built new homes in Baltimore City, Baltimore County and Harford County. Growing up in Parkville, a seven-year-old Lynch Jr. would work with his father on job sites, sweeping floors, taking out trash, and picking up or hammering in loose nails.

“My dad was building a community on Old Harford and Willoughby Roads, about 15 to 18 houses. I’d go down with my cloth apron and do whatever job he showed me. I knew then that I loved it and that it was part of me,” Lynch Jr. remembers fondly.

When Lynch Jr. was about 12- or 14-years-old, his father started construction on the Marywood and Cedarwood neighborhood projects in Bel Air, in Harford County. “He would take me out to the property before any construction started and put me on a big bull dozer. He’d say ‘Get a feel for it. You can’t hurt anything.’ It was like riding a big Tonka toy. I loved it!” After construction started, Lynch Jr. would again clean out houses and do trash work as the project progressed. Always eager to learn more, Lynch Jr. often begged his father to attempt a new skill, but his father was steadfast in only allowing him to do jobs that he had himself done before to ensure that he learned it from the bottom up, correctly and thoroughly.

“My dad taught me the value of hard work – good work. A clean workspace. Being on time. Being honest in your communication. He let me know that getting dirty was honorable, and boy, did I get dirty mucking out foundations,” he chuckles. He said the crew would tell him they weren’t letting the “owner’s son” get away with anything, and he would say, “Look at me. I’m covered in mud. What am I getting away with?” 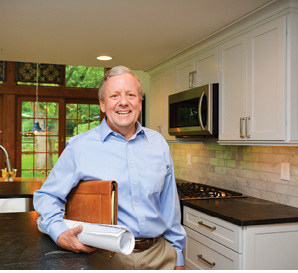 Along with his father, Lynch Jr. would work with a crew of 20-25 craftsmen of various age levels. “I learned the trade and the skills from some of the best guys in the field,” says Lynch Jr. “I learned hands on from contractors and carpenters. I learned how to pour footings, do framing, cut moulding, install windows, lay roofing and hang siding.”

After Lynch Sr. died suddenly in 1973 while Lynch Jr. was still in high school, he continued to work for his father’s foreman, Dick Herring. “I stayed and these guys took care of me. Dick taught me how to lay out foundations and pin footings. I also worked with a guy named Harry Barnes, a former coal miner from West Virginia, who was one of the best carpenters I had ever seen. And, a guy named Frank was a premier trim carpenter, who taught me to cut trim, cut crown mouldings, and cut exterior and interior mouldings. They taught me everything!”

Dick Herring helped Lynch Jr. get his contractor’s license and promptly fired him when he did. Lynch Jr. remembers Herring saying he couldn’t stay on and compete against him. “I guess it was the fatherly equivalent of sink or swim after being thrown off a pier,” Lynch Jr. laughs, maintaining it was the right thing for Herring to do as he admits he quickly went out on his own to make his way.

THINKING OF THE FUTURE

Don Lynch Jr. and his wife Mary Sue bought the house and property they’ve now called home and work for 29 years in 1988. It was their seventh move since they had been married, and the decision was to buy something that could be their last.

“The house dates back to 1875, so there have been plenty of renovations, additions, changes and upgrades over the years. Before moving in, we put on this kitchen addition, and every Friday night we’d get pizza for the kids and we’d hang out, put up the bead board ceiling, and do other trim work. It really made the house our home with all us doing the work.”

They decided to tear down the old barn and construct a new building that could be their office and vehicle storage. “I didn’t want to invest money in rent in an industrial park. Financially, this made more sense and it’s worked out perfectly.”

A “by the book kind of guy,” Lynch Jr. followed all the county protocols to obtain a special use exception to operate his business on the property. “We do things the right way. No workarounds. If we ever did have to sell, the new owners would have no issues.”

The kids include Donald F. Lynch III, currently Project Supervisor and Customer Service Manager at Lynch Construction, and three additional sons and a daughter. While all five kids worked in some capacity in the business while growing up, it was only Lynch III who enjoyed being on the job sites enough to make it a career path. “I’ve always liked seeing a project through to completion,” Lynch III says. “During school breaks in middle and high school I would work on the job sites with my Dad, building stuff, using the cool tools like the nail guns and saws and especially the big equipment. I had my own tool belt, too,” he quips.

The Lynches would be the first to admit that while hard work is good work, it’s still hard work. Lynch Jr. was already in from the field when Lynch III decided to come in about five years ago and started taking over the project management and client relationships. Mom Mary Sue recounts how Lynch III has connected with the clients, seemingly finding his best skill to date – customer service. “Clients love him,” she says excitedly. “They marvel how much he reminds them of his father, Don Jr., with his mannerisms, looks and ethics. They trust him to deliver what he promises.”

While both Lynch Jr. and Lynch III confess they’ve made no hard decisions on the next phase of the business, their clients may be showing them the way. Previous customers of Lynch Sr. and Lynch Jr. are now calling and working with Lynch III. “Two out of five jobs are from previous customers,” says Lynch III. “We’re adding in-law suites to single-family properties to create multi-generational homes. We’re remodeling a house we previously built to accommodate the aging owners. We’re finishing basements or adding additions for adult children or live-in grandchildren.”

They agree that recent clients have wanted to remain in their homes and invest in improving it instead of moving or building elsewhere. They like their neighbors and neighborhoods. They’re nostalgic about their homes, but they need to make changes so they can stay. And, with a reputation of three generations of Lynch men they can count on, they’re calling on Lynch Construction to help them.

This article was originally published in the December 2017 issue of I-95 Business. To read the full, original article, click here.

Posted in Uncategorized
Back to News